Camping in National Parks turned out to be an experience in itself, mostly good, but sometimes requiring minor adjustments to our expectations. But hey, that’s what travelling is all about right?

Our first camp at Fallen Leaf Lake turned out to be one of our favourite, but also the most expensive at $33 a night. At first we were charmed by the ‘anti-bear food containers’ which required us hauling all our food and hygiene products (?) out of the van, and into the container, at every camp (so almost every day until we reached Death Valley). 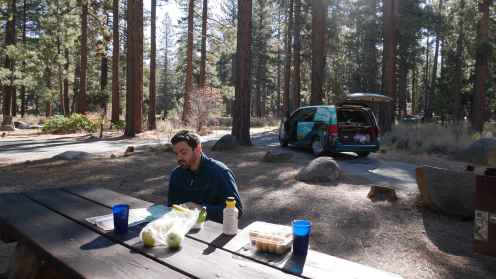 We enjoyed our first camp fire, first with our neighbours who invited us over for dinner (tortilla soup and californian wine) in exchange for a little sugar for their morning coffee (which is more than a fair deal if you ask me!). And then our own fires, learning to resort to pine needles and cones instead of firelighters and eventually even our own wood that we picked up and carried back from our day hikes. This turned out to be a huge money saver, as the going rate for an evening’s worth of firewood bought at camp was $8 (for 6 logs). There’s something rewarding about bringing back your own firewood! On our last night we ran out of gas for the cooker, so even ended up cooking our leftovers over the fire. We of course enjoyed a few grilled marshmellows too, and even discovered the American version (‘Shmors’ or something like that which adds biscuit and chocolate to the mix, can’t go wrong there).

Learning to live without

The first thing we learned to live without was wifi. None of the camps had any, and we were always too far from civilization to go to a coffee shop or fast-food to get our fix. This (coupled with the fact that we never got round to buying a US sim card) compromised our ability to ‘plan ahead’ during the whole trip. We often had to drive around to find a not full, or open campsite (as we were end of season in the ‘mountain’ parks and beginning of season in the ‘desert’ parks). On 2 occasions we ended up camping wild: 1 night at the gate of Yosemite Valley, and we were not the only ones! ; and the other at the entrance of Death Valley, literally sheltered by the ‘Welcome to Death Valley’ sign during a very violent sandstorm which forced us to have dinner in the car and kept us awake most of the night (dreading the inevitable moment we would need to go outside for a pee!).

The second commodity we quite easily gave up was electricity. Only the first camp, and the one at Mono Lake had plugs in the bathroom. Fortunately most of our electronic devices charge via the cigarlighter, except for my camera battery. It was always an adventure finding plugs in bathrooms or laundries, but this was an easy commodity to give up. We also struggled with the absence of laundries (we only found 1 in Sequoia NP, which turned out to be one of our favourite camps) and sinks for washing dishes. But what we missed the most was the unlimited hot shower. What a luxury that we take for granted. Even in the most expensive camp, the shower was coin-operated: ie 1 dollar for 3 minutes and you better have change (as we never did, we always shared the shower, me going into the men’s and having to be strategic about my hair washing and rinsing). But in most camps, there was no shower. This turned out not to be a problem in Death Valley, where we washed ourselves in our bathing suits, right in front of the ‘Do Not Shower’ sign at the sinks. At least in the desert, it’s quick dry!

All of these minor sacrifices were of course well worth it as most of the camps were in the middle of nature, allowing us to enjoy day hikes and viewpoints, rivers, forests and deserts, and night skies right on our ‘doorstep’. Our favourite camp on this aspect has to be the last one, in the Mohave Desert, in the middle of cactuses and desert and nothing else. A perfect way to enjoy our last night away from civilization. 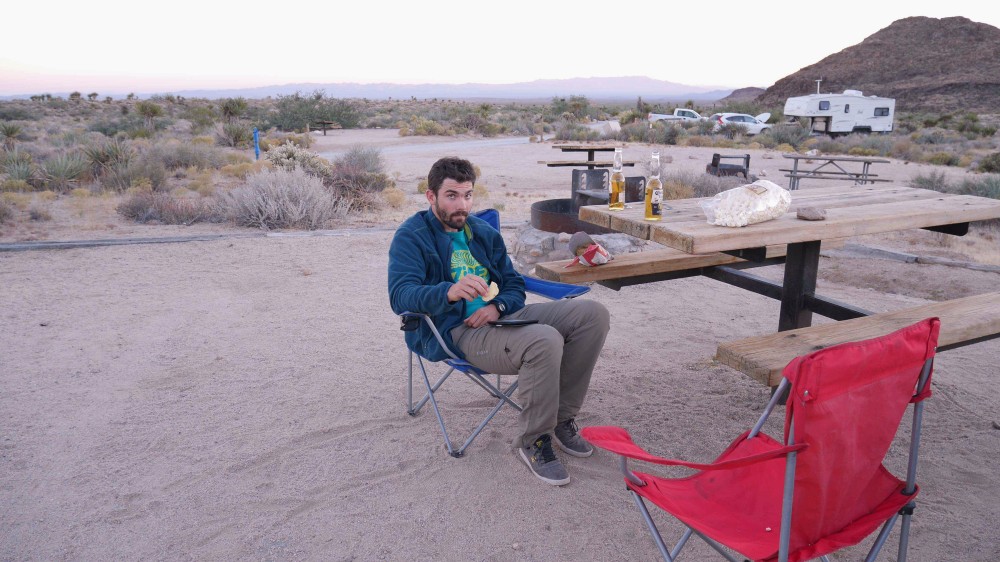 We rented the van from Escape Camper Van and are all-in-all satisfied, even though there were a few malfunctions (including smoking brakes… but we got a discount for that so that’s ok!). We slept in the back on a very easy to set up bed, and right at the back was the mini-kitchen. Mini, but turns out we didn’t need anything else: mini-fridge (to keep all our beers cool ;)), a 2-stove gas cooker, mini-sink + tap, crockery + cutlery, 2 foldable chairs and some storage. What a great little van. I can’t think of a better or cheaper way to travel the American South West. We miss it already 🙂 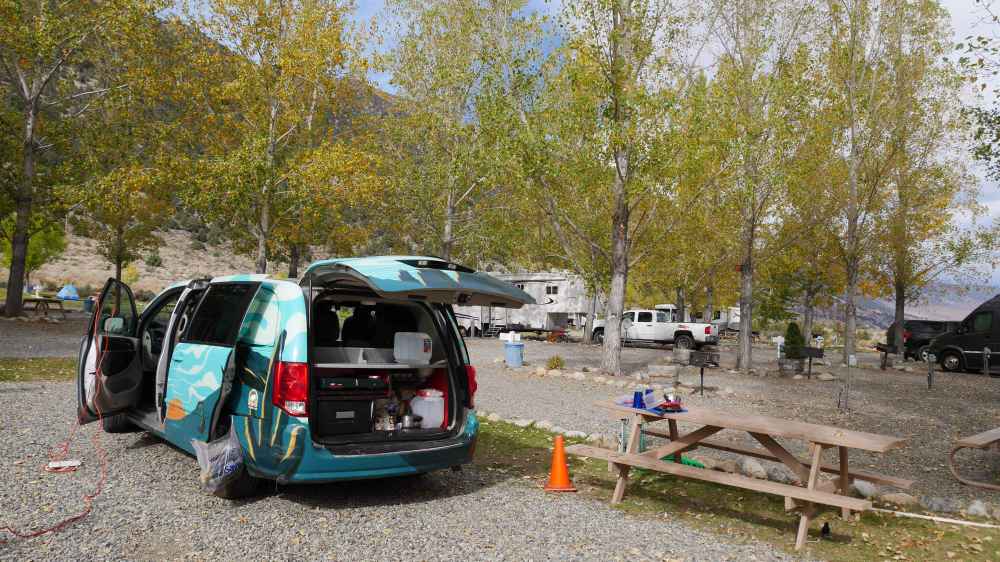