On our way to Sunshine Coast, we stopped for a short exploration of the Glasshouse Mountains, following the recommendation of our Brisbane hosts. These mountains, or hills, are an odd shape, jutting out from the flat surrounding bushland.

We did one of the loop walks around the biggest of these dome-shaped hills, enjoying the soft morning sunshine, sights and sounds of the forest, and our calm surroundings. A great opportunity to stretch our legs and have lunch, before hitting the road again.

Sunshine Coast is surfer’s paradise, and thus, where Jeff (probably the only real Aussie surfer-dude we know) calls home! 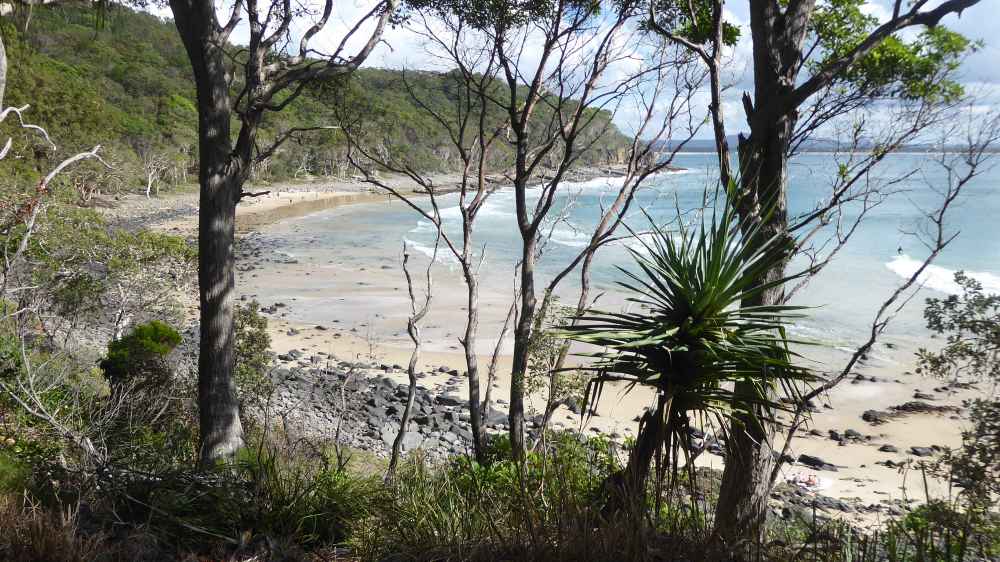 We met him and his younger brother, Brad, while they were travelling in Mexico, and shared fond, but sometimes hazy, memories of the few days, and nights, we spent together in Tulum. We kept in touch, knowing we could see eachother again in Oz. They let us park in front of their house for our few days, located steps away from the beach!

It being Sunday, Jeff and Brad already had friends over when we arrived. After stocking up on beers, we went straight to the beach for our first, of many, early-afternoon sundowners!

We caught up on funny stories about our time in Tulum, and travels since (after Mexico, Brad had also continued to South America for a few months). Jeff had also kept pretty busy: he travelled to Indonesia, came back for his girlfriend Courtney, and they now have pretty long-term plans together! We all got to know eachother a little better: jobs, hobbies, music, relationships, life. Jeff and Courtney have bought the cuttest VW van together, and intend to do it up and camp around with it on weekends and holidays.

They took us for a spin to a lighthouse overlooking Moololaba beach, for sunset.

That evening, after stuffing ourselves on home-made spaghetti bolognese, we headed back to the beach where Jeff demonstrated his pyromaniacal skills: in minutes he had lit up a huge bonfire and was already working on making fireworks out of tinfoil and paraffin. He also picked up a giant crab (they were scuttling around all over the beach), with his bare hands, which didn’t fail to impress us! 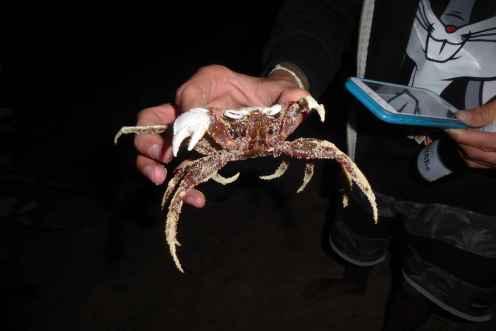 The following day, only Brad had to resume his work routine: finishing his medical degree and thesis, and receiving patients, all at the same time. We admired his resolve, in the face of us indulging in late nights and mornings, traipsing in and out in bathing suits and flip-flops. Today Jeff, Courtney, and their friend Jay, were taking us all to Noosa beaches in the van. 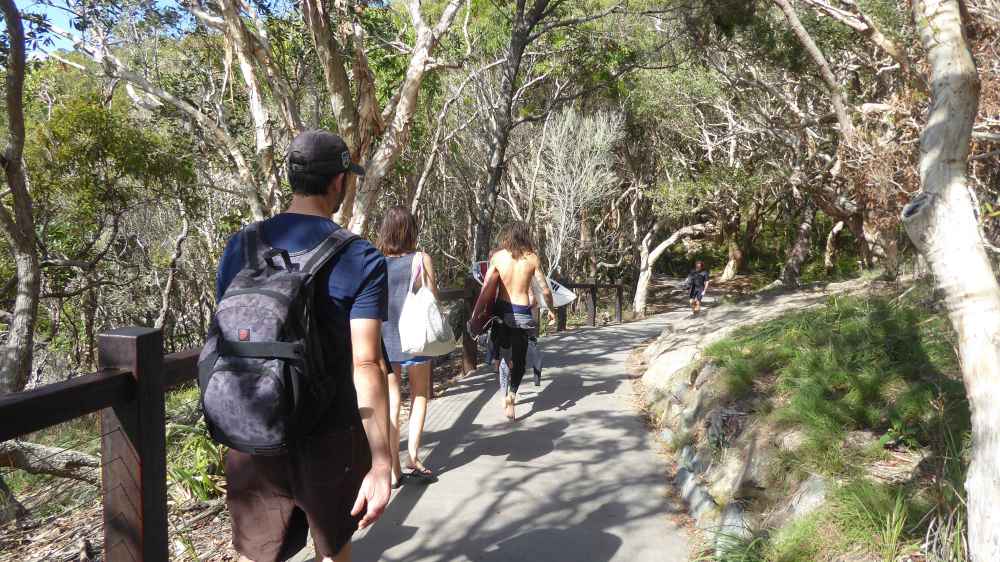 While Jeff and Jay had fun in the surf, we had fun in the sun: walking up to the viewpoints at Noosa heads, playing in the waves and relaxing in this perfectly-sized, naturally heated, rock pool which also featured a natural slide straight into the sea! 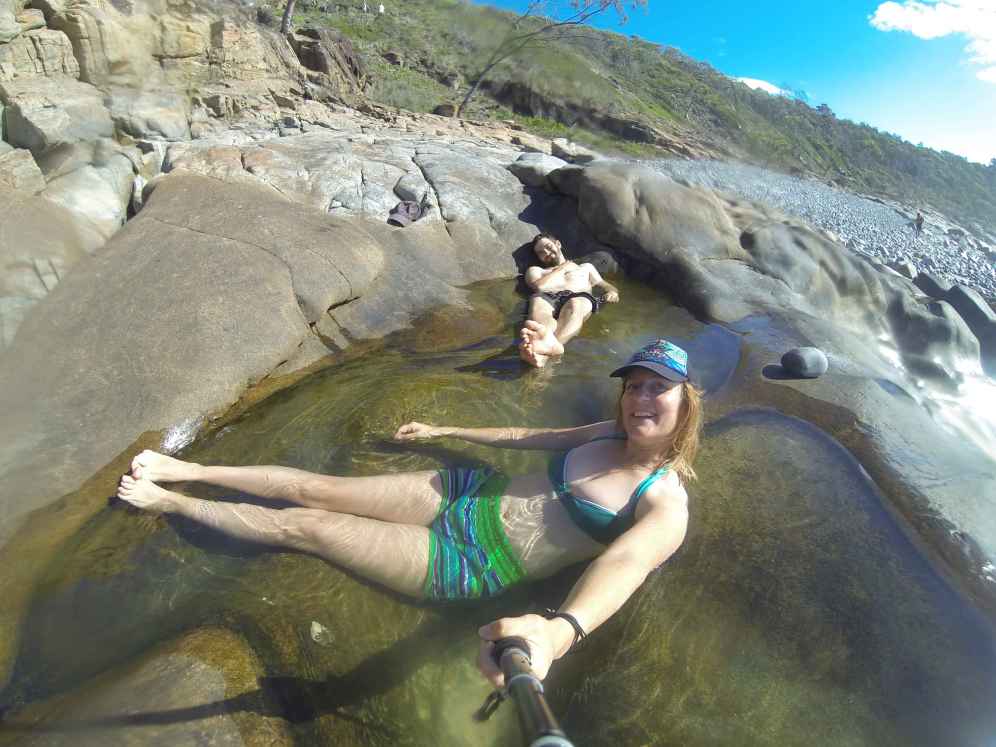 I spotted this beautiful bird, but only had time to take this fuzzy picture before it flew away! The day got even better with the sighting of an iguana close to where the van was parked (even though we were on the look-out for koalas!), and the most scrumptious fish ‘n chips in Noosa. That evening was more chill: a round of Uno and a very modest dose of tequila! 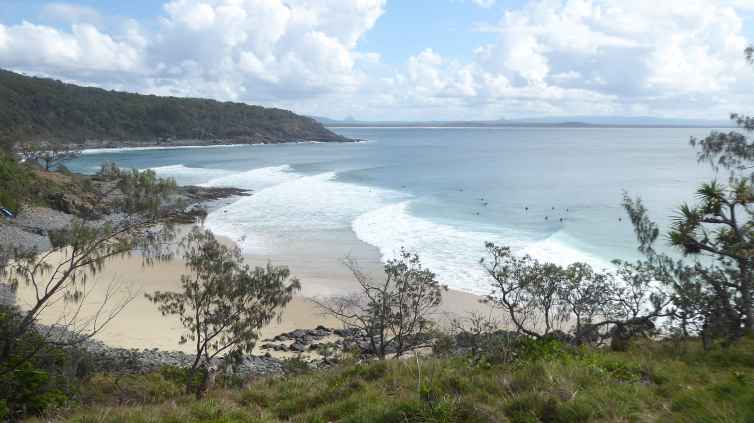 The next morning, while Jeff and Jay were out surfing early, we drove ourselves to Moololaba for an all too rare day of beach and relaxation, doing absolutely nothing (apart from catch up on news with friends and family, write in the journal and blog, sort photos, plan the next steps, and the list goes on…!). We did have fun in the water too, and Renaud went for an afternoon run up Mt Coolum, on the other side of the bay.

That evening we cooked up a Mexican dinner for our generous hosts, remembering the great times we spent there, through our taste buds! 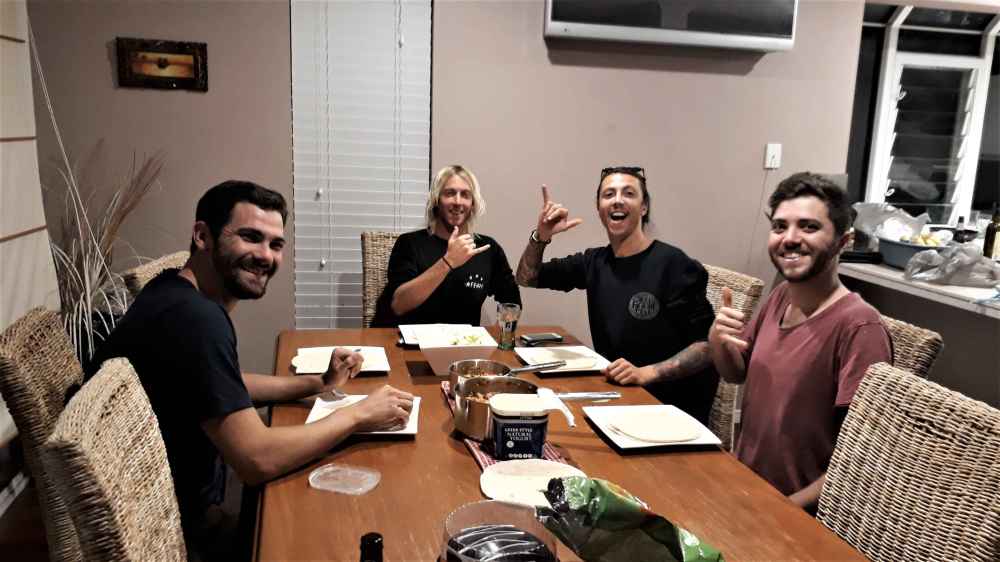 We left early the next day, while the guys were out surfing again. It was hard to tear ourselved away from this easy-going lifestyle. On our way out we stopped at the weekly crafts market at Eumundi, recommended by Brad.

That’s when we noticed our sweet hosts had decided to use a few of their best prankster bumper stickers on our van! Thanks guys 😀 Side note: we never took the stickers off throughout the trip, and returned the van with them still on! Some travellers are probably driving around with them as we ‘speak’! They’ve sure got some mileage on them! 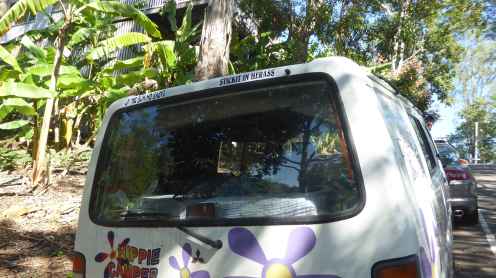 Thanks again for having us over, showing us around and letting us experience the famed Aussie-surfer lifestyle (minus the surfing, for us)! All the best for your upcoming endeavours and life-changes… Keep in touch!