After our month travelling through east Indonesia, struggling with transport, bargaining, lack of food variety, etc, it was a breath of fresh air to arrive in clean and efficient Singapore. We loved being able to get around on the underground trains, no longer having to depend on unreliable minibuses, expensive taxis, dubious scooter rentals and private drivers. The neighbourhood where we stayed was close to Lavender station: not much to see and do here, but judging from the reasonable prices, you do get the sense that real people live and work here, unlike other parts of Singapore.

On that first night, we went to one of Singapore’s many famed food courts. This one in Lao Pa Sat was very smart and busy and had a great variety of all kinds of Asian foods and fusion cuisine. We were really exhausted though, so after a jug of Indian beer (which tasted amazing after having been limited to Indonesia’s staple diarhea-inducing Bimtang beer for a month!), we had no energy to move on the Clark Quay, where all the night-time action happens. We went straight back to our backpacker’s for a good night’s sleep.

The next day was jam-packed. We started off with Singapore’s iconic Gardens by the Bay, a very busy tourist attraction, but the crowds are quickly forgotten. The unique and futuristic architecture, is something you’ve only imagined while reading science-fiction books.

The explanation panels do almost describe a vision for the future like a utopia: every city incorporating nature, gardens, food-growing, water and energy collection, into its infrastructure. This vision also raises the worrying question: are artificial places like these the only ones where city dwellers will be able to come into contact with nature in the future? 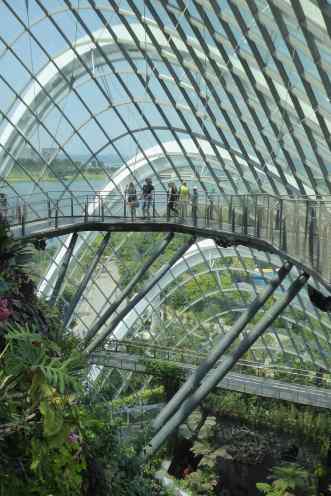 In any case, it was very enjoyable to get out of the scorching July heat, into the the cool, humidified glass bubbles which are the Cloud Forest and Flower Domes. The Cloud Forest was expecially spectacular with it’s 5 or 6 levels of vegetation, each with it’s own climate like on a real mountain, and a giant waterfall gushing down from the top.

We admired all the species of plants, and especially flowers, from all over Asia, and the world. 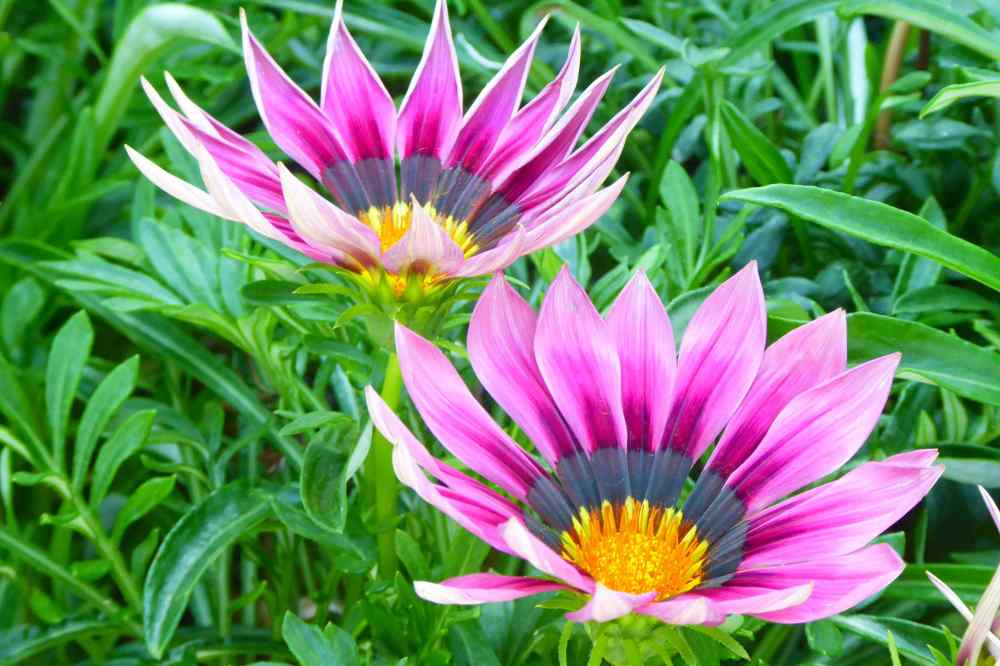 Back outside, we wandered through a cactus garden, a giant water fountain for kids to run through, and a giant window into the artifical lily pond which houses giant catfish and all sorts of other ugly-looking fish. 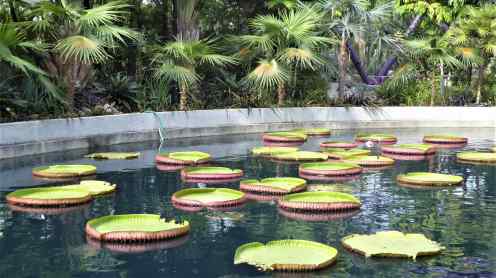 From there, we walked towards Singapore’s famous Marina Bay hotel/mall: 3 buildings with a giant roof deck linking them together. 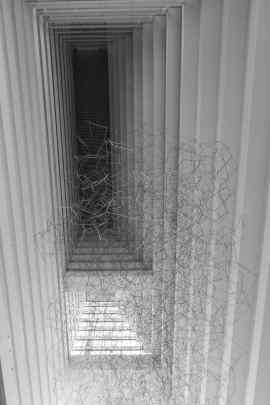 It was too early for a sundowner, so we had time to kill. Fortunately, in this bustling city, there’s always something going on close by: for a reasonably-priced entrance fee, we went the the ‘Future World’ exhibition at the Art & Science Museum.

Neither of us had been to anything like it. The theme was interactive art incorporating light technology. We could touch walls and surfaces to make projected objects move. We could contribute to a virtual city by drawing a mode of transport (in our case, a very funky bus driven by a punk with a very cool mohawk!), and scanning it into a projector. Our bus appeared, crawling through traffic on the highway. The same exhibit also featured fish in an ocean.

We went through dark rooms with 3D light shows and waterfalls. My personnal favourite was walking through a grid of millions of tiny light-bulbs which represented the stars in the Universe. Each bulb lit up in different colours, forming a pattern with all the others, which would flow with the music. We could even select the programs which controlled the lights, all inspired by astronomical phenomena.

The sun was setting just as we came out. We decided to pay for a drink at the top of Marina Bay, rather than pay an entrance fee to the Sky Deck, which is a total rip-off. We queued for a 1/2-hour for Ce La Vi bar/restaurant. It was very busy up there, but we found a space on a couch by the railing. The view on the city and waterfront 80 stories below was spectacular. All the buildings were lighting up one by one, as the sun set, tinting the sky with orange and purple. On the other side, there was an 8pm light show on the Gardens by the Bay ‘trees’.

We nursed our precious drinks until we could hold off the waiters no more, then ordered another round. We also got lucky: as our table was reserved, the waiters found even better seats for us, overlooking the infinity pool (only accessible to hotel guests though). We watched, amused, as this world of ‘elites’ flaunted their wealth around us, dressed up to the nines, old white men with young Asian women hanging off their arms. In the pool, the women were completely made-up, complete with earings and time-consuming hair-dos: whatever they were there for obviously had little to do with swimming. Luckily for us, rich people also don’t finish their drinks! So we gladly took on the task of finishing our neighbour’s bottles of champagne and almost untouched cocktails, under the watchful eye of the waiters. This kept us going for a good hour, until we were too hungry to futher postpone our departure. We headed to Chinatown for a bite to eat.

Chinatown was surprisingly disappointing. Maybe we just weren’t in the right area, but all it was was market stalls and a few (very few) restaurants. It wasn’t even that busy. And there was no Chinese food to be found, so we settled on on Thai restaurant that used to be an opium den back in the day. Here we got our first taste of Singha and Chang beer, a good preparation for our arrival in Thailand in the next few days.

The next day was a little more chilled. We mainly wandered through Little India where we had lunch and visited some Hindu temples and colourful boutiques. 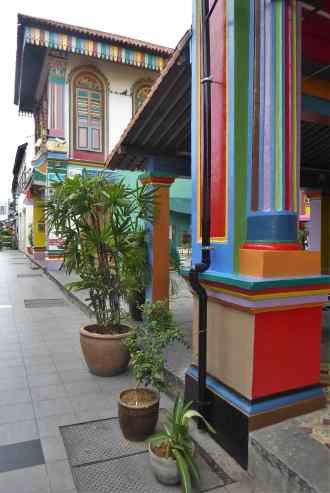 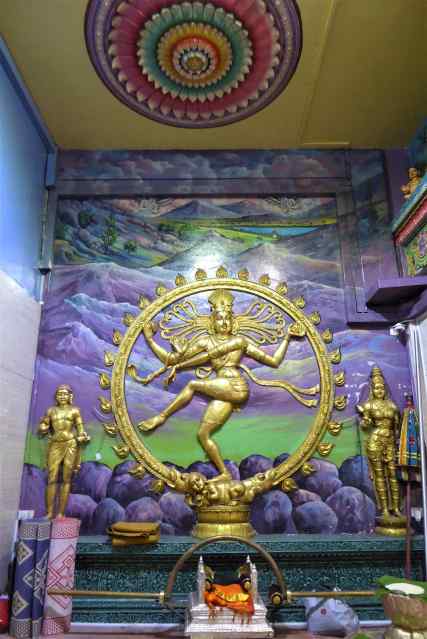 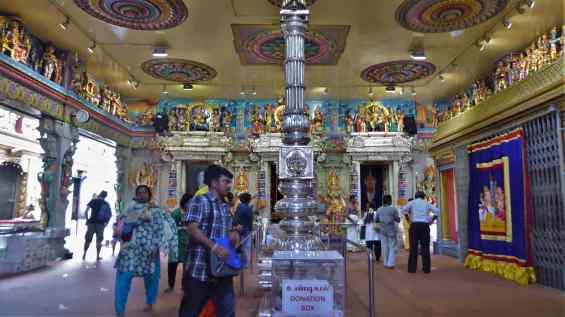 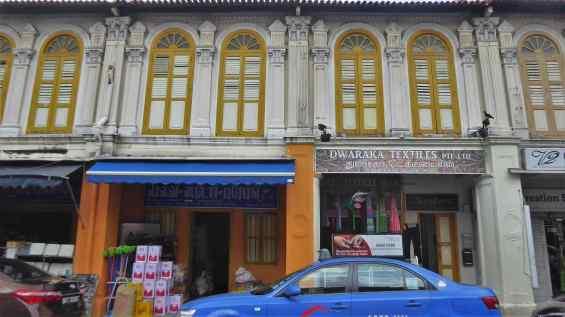 And then, onto Arab Street, the Malay quarter. Singapore has a very interesting cultural heritage as its population is made up of Chinese, Malay and Indian communities which do not really mix. This means just as many languages (Mandarin, Malay, Tamil and English), and religions (Buddhist, Islam, Hindu). We didn’t see much else apart from a little street art and the Grand Mosque, as I (Steph) was suffering from heat exhaustion for the first time since the beginning of our travels (a very rare occasion). I almost passed out in the gardens of the Malay Cultural Heritage Museum, where we took a nap. 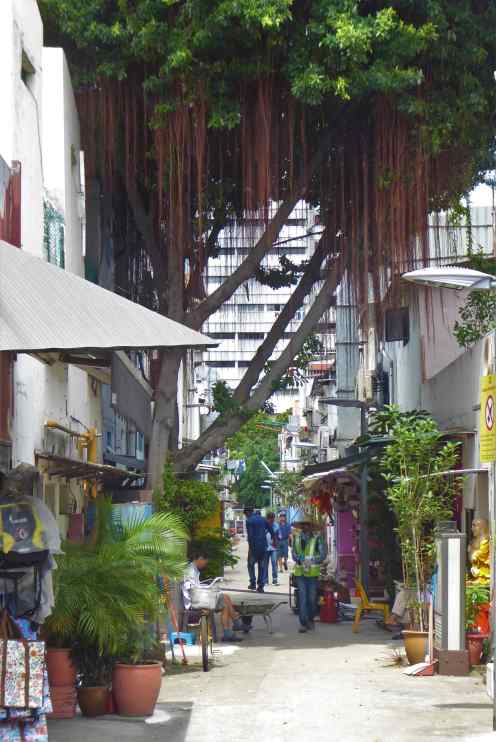 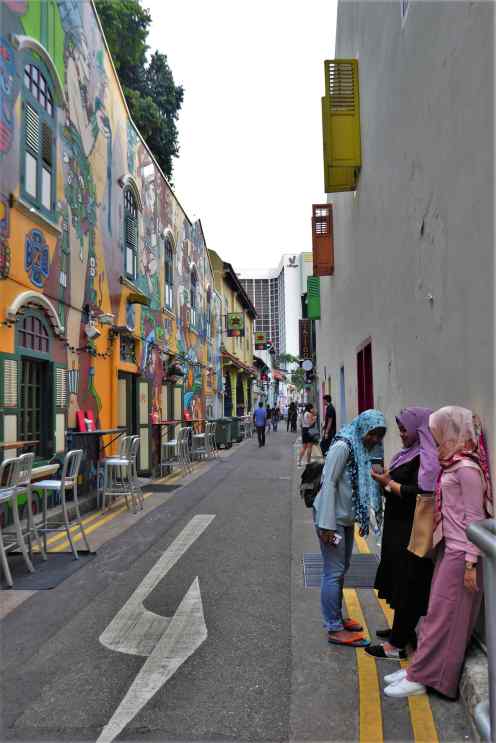 We took refuge in the first mall we could find, the very modern Ion center on Orchard Street, biding our time until our rendez-vous later that evening with Renaud’s friend, Olivier. 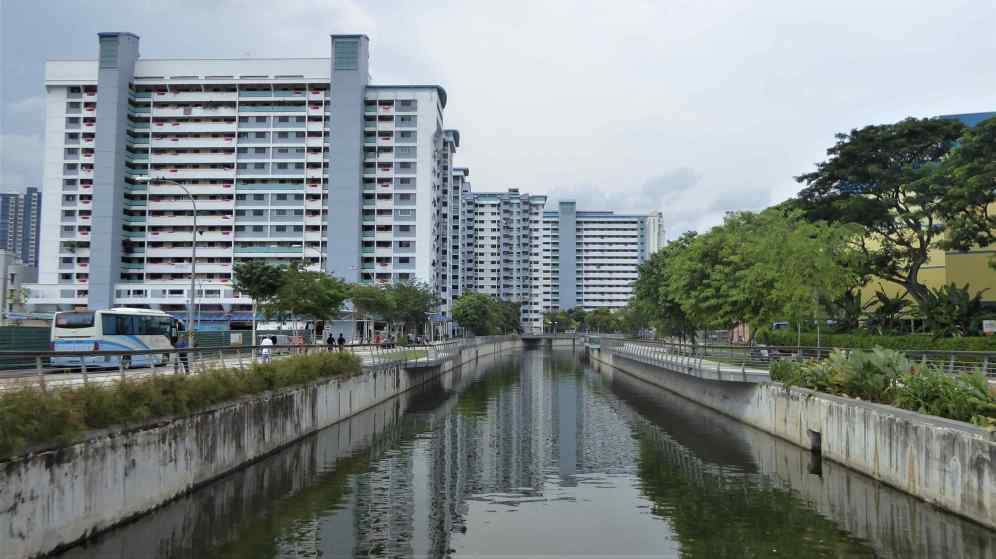 We met up in a food court in Newton, where Olivier introduced us to all his favourite delicacies and the 2 old friends caught up on eachother’s news and stories over many jugs of beer, late into the night. Olivier, a Singapour resident for almost 10 years, and working in a similar field as us, had great insight into this strange city. Don’t be fooled by its spotless perfection: it all comes at a cost. Singapore is highly policed (not by actual policemen, but surveillance cameras at every corner), caning is still a legal punishment, and we had already heard about exhorbitant fining for anything from spitting gum onto the pavement, to kissing in the street. I suppose the average upstanding citizen is relatively unaffected by all this. But we were also surprised to hear that for all of Singapore’s wealth, there are little to no public schemes to assist those who have none. Typically, health insurance and retirement plans are all run by private entities. Many older citizens who hoped to be sustained by their children in their older days, as is the traditional Asian way, are left with nothing. After working all their lives, they have to return to physical and/or menial jobs, still working well past the age of 70. It is also virtually impossible for the average worker, nevermind the poor, to access any form of property, or even car, ownership (a car license costs $20000/yr), meaning that all that hard-earned money is mostly squandered on an expensive lifestyle, and by the end of it, one is left with nothing. As with all accumulation of weath in the world, every rose has its thorn, and it’s always the most vulnerable who are the hardest hit. On that note, we said our goodbyes to Olivier, having thoroughly enjoyed his company and the distractions of this animated food court.

The following day was dedicated to Renaud’s birthday treat: a day at Universal Studios Singapore. As a fervent cinephile, Renaud enjoyed every minute, despite the overbearing heat and crowds (both of which he usually cannot stand). We waited an hour to get in, it was mayhem.

To focus on the positives though, our highlights were all the rides incorporating ‘4D’ cinema, which, for Renaud, is the future: our seats shook and did 360 degree turns in all directions in the Transformers ride (which we did twice!), as a smoke and fire-ball spewed out on queu with an on-screen explosion. In the Shrek ride, we got sprayed with water as Donkey sneezed on us. 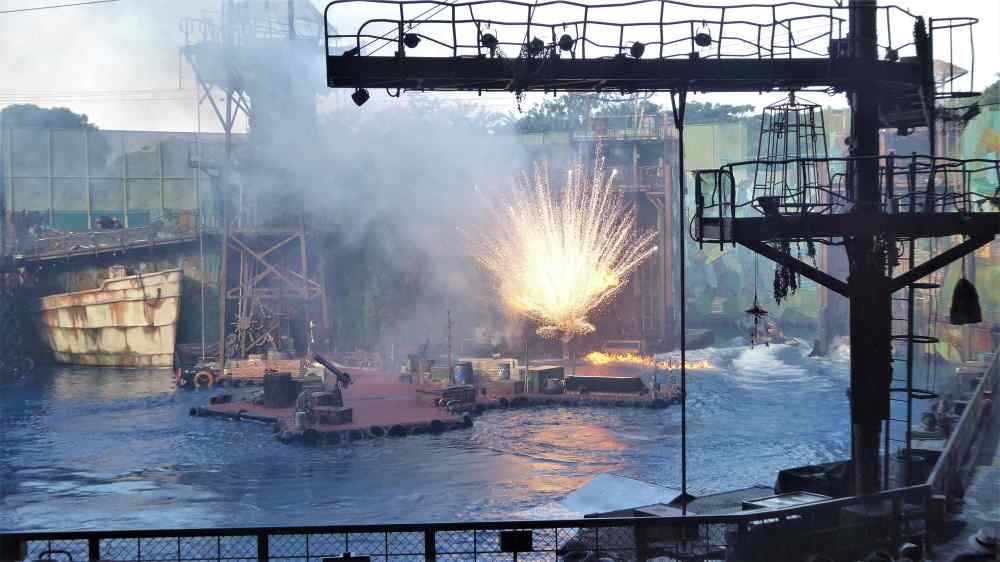 Wanting to make the most of our last evening in Singapore, Renaud, keeping in theme, went to the Imax to watch Planet of the Apes, while I treated myself to a night at Cirque du Soleil (not really Renaud’s scene). The performance was named ‘Kooza’, a Sanskrit word for small box or treasure. Having watched these shows on TV before, I knew this was no regular circus. And they didn’t disappoint. All the ethnic-themed music, costumes and acrobatics were innovative and none included animals. A man spinning around in a giant hula-hoop, a monoclyclist on a tight-rope, a giant contraption in the air, kept in balance, and in incredibly-fast rotation, by an acrobat on either side. Every performance was pushed to the brink of feasability.

Still determined to make the most of every last moment in Singapore, we went to the Botanical Gardens the next morning, to meet up with an aquaintance of my sister. We only had time for a quick coffee, Diedre being a very busy woman. She too knew much about life in Singapore, having lived here for over 20 years. Through her long career in sales of luxury collector’s items and upscale services to the very rich and famous, she know all about the lives of the ‘elite’. Despite being a good story-teller, her eccentric stories were hard to relate to, being miles away from our current living conditions, or even our lives back home. These people seemed so disconnected from ‘the rest of us’, like somewhere along the line, being surrounded by all this artificial happiness, they lost the plot about what really matters in life, and what really doesn’t. We enjoyed Diedre’s outgoing personality, and appreciated her insight into this foreign world! She left us in the peaceful Gardens, where we meandered for a little while longer, before heading back to our backpacker’s to collect our bags, and setting off for the airport, destination: Bangkok!