The morning following our afternoon waiting in vain for the bus from Puerto Varas to Cochamo, then our failed attempt to hitch-hike there, then sharing our tent in a camp by a lake at the foot of Osorno volcano in Ensenada, we (Julie, Juliette, Louis, Renaud and I) were finally ready to hit the road again (see previous post). We were thinking of trying to hitchhike again, when the elusive bus finally came. It was packed to the brim. We were lucky to have spent the night where we did, as many backpackers just a little further down the road weren’t taken onboard due to lack of space (we had never heard of such a thing in South America, there is always more space!). The day was beautiful and the route through gigantic forests and over torrential rivers, very scenic.

We finally arrived in the little village of Cochamo, and hopped directly onto a local transport to the trailhead. Access to the trail is free, we just had to register and choose a campsite ahead, to make sure it wasn’t full by the time we arrived.

And so we started walking. In store for us today, ‘only’ 12 km from Cochamo to La Junta in the Valley often referred to as the ‘Yosemite of Chile’. This little-known place had been recommended to us by a Dutch backpacker we met in Bolivia, and we didn’t regret taking his advise! Most of the people there were locals, or rock climbers (or both!), and even most Chileans we talked to afterwards had never heard of the place.

The ‘only’ 12 km ended up taking all afternoon, from 11am to 6:30pm. This because of the huge load on our backs: as a reminder, this was the first time we would hike with so much weight, probably 17kg for me (Steph) and over 20kg for Renaud. We had crammed in our front and backpacks ALL our stuff, even the stuff useless for this trek like summer clothes and souvenirs, plus camping gear and 5 day’s supply of food, in case we decided we were fit enough to continue to the Argentinian border by foot, and not come back. 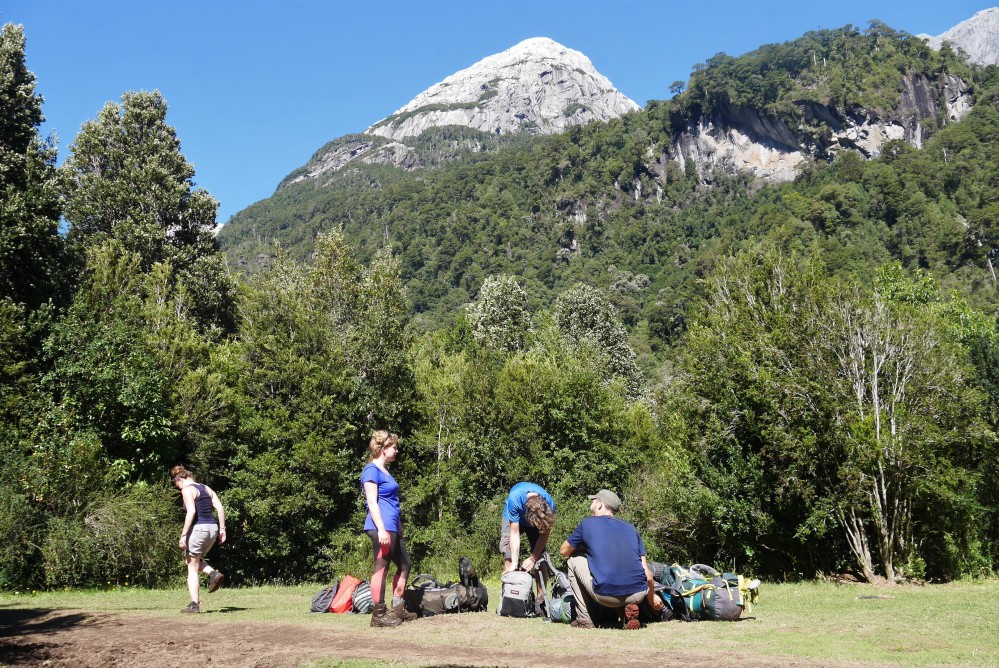 Added to that was the awful state of the trail, which we had been warned about, but expected to have dried up in the last 2 relatively rain-free days. We were knee-deep in mud everywhere: mud trenches, mud swamps, mud downhill and uphill! We either spent time and energy bypassing all the obstacles, or we had to go through them, trying not to slip and fall in the process or get ourselves too dirty or our shoes too wet. The path is in such a bad state as it is meant for horses who carry commercial loads through several times a week, and are responsable for carving deep trenches in the soil which fill up with mud, horse dung and flies! Progress is also slow because the path is never truly flat, it is always very steeply going up or down. After my tremendous effort hiking and cramponing up the Villarica volcano in Pucon just 3 days ago, I was again enduring the hardest hike in my life! And everyone was walking too fast for me! 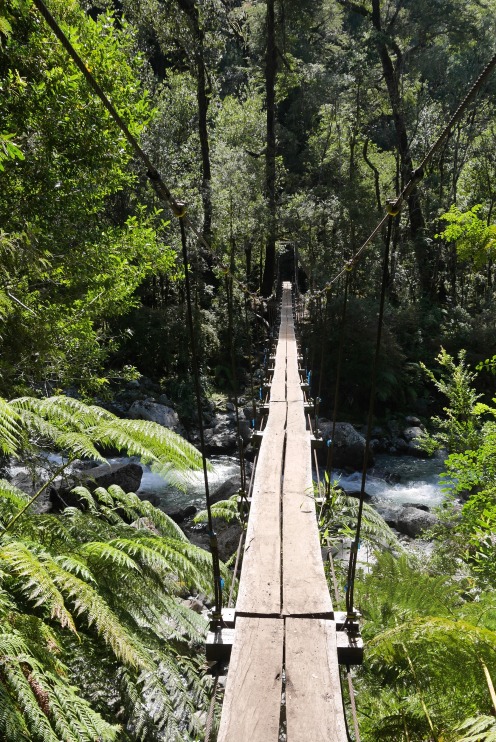 We were joined on the way by a chilled Chilean from Santiago, Fernando, who Julie had bumped into several times in the past few days. We finally arrived at camp, filthy and drained! We immediatly took in the view of the setting sun over the lush green valley and sheer granite peaks, it was spectacular and well worth the effort!

It truly did resemble the Yosemite Valley in the US, which we had been to a few months ago, minus the noise, 4-lane roads, and double-decker buses filled with rich lazy tourists!

That evening we didn’t stay up late, and had a well-deserved lie-in the next morning. 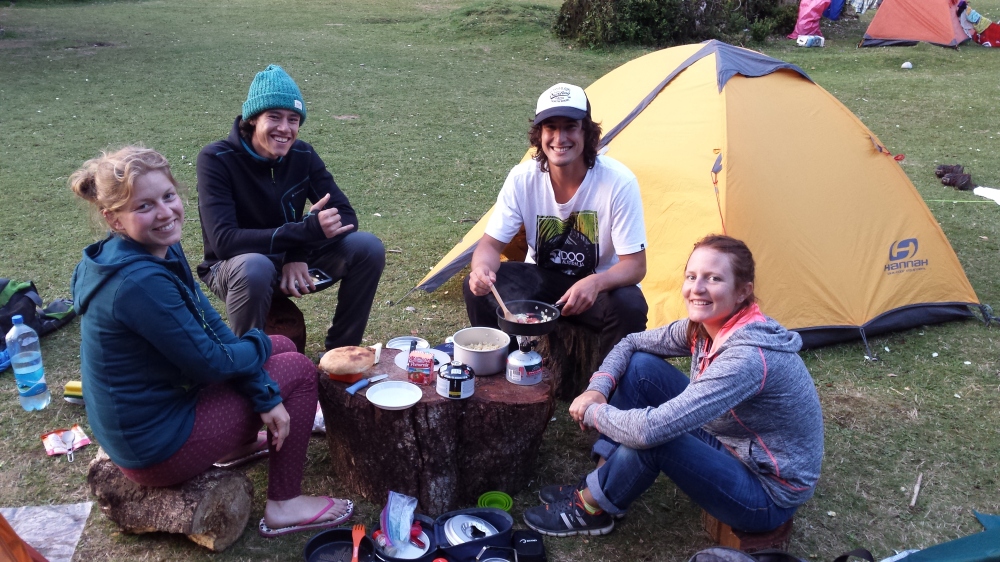 By the time we did get up, the Sun was high in the sky and it was hot. We decided on doing a short ‘easy’ walk to get to a waterfall: but it ended up being a long steep hike, and the waterfall was tiny, probably not the best idea! We cruised through it anyway, feeling as light as feathers without our packs! We also met a Chilean girl who had done the infamous Paso Leon trek to Argentina, and gave us loads of useful inside info and made it sound almost feesable. 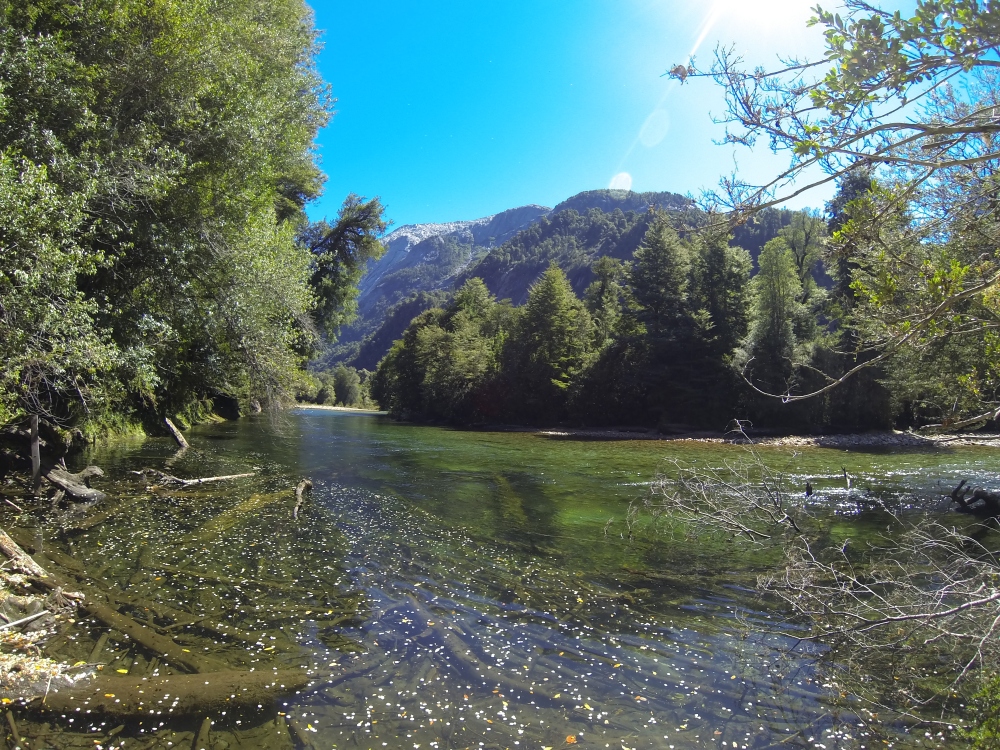 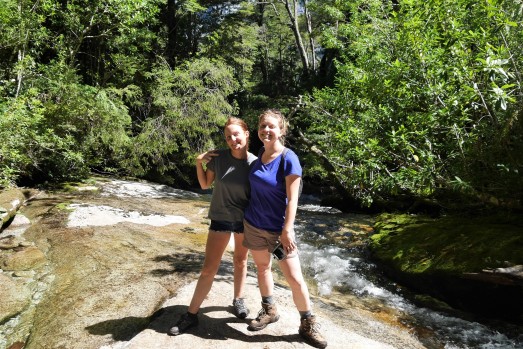 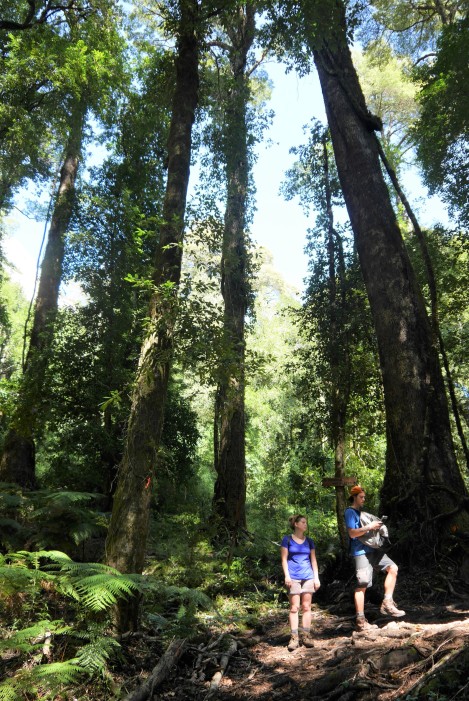 We headed back to camp for lunch, then went all together to the natural water slides next to the camp. It was packed with people, but really fun and refreshing swimming in the cristal clear blue water. In fact, the scariest part of the slide was falling into the freezing water!

After that we chilled on a white-sand river bank further away, where there was no-one, just us surrounded by granite domes in all directions. A perfect spot for Louis to get out his drone and take in an aerial view on the Valley. Why bother hiking when you have a drone?! The spot was accessible only via an old trolley on a zip-line, which was as fun as it sounds: like flying over the river! We enjoyed the beach and subsiding afternoon heat, until sunset. 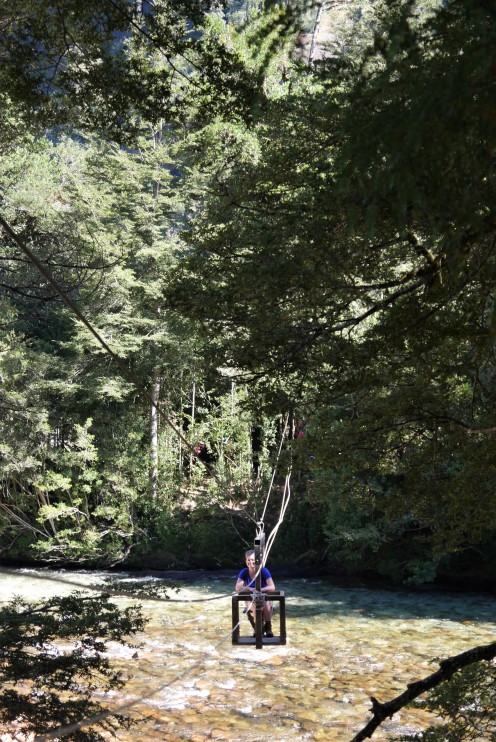 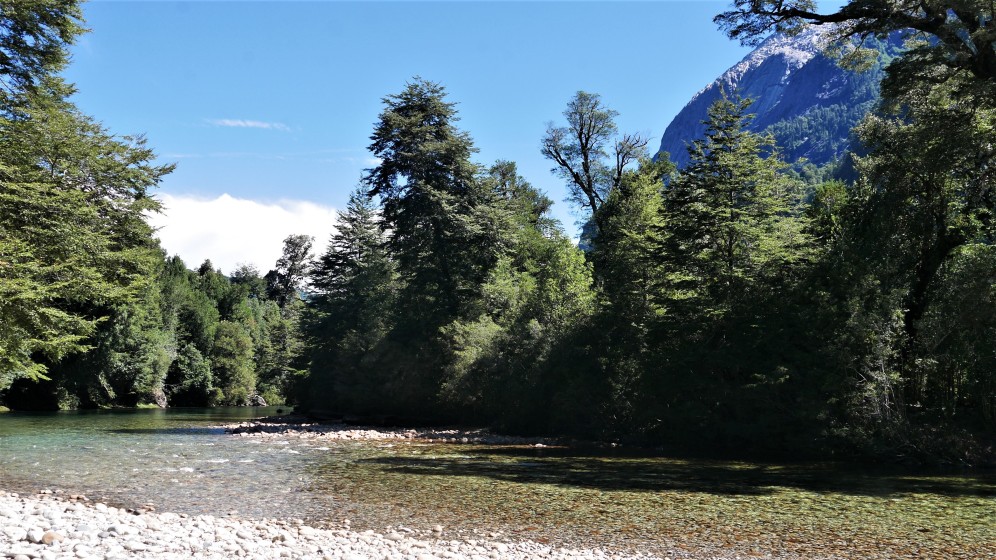 On the way back to camp we found the ‘bread-lady’ selling her stuff around camp, and cleaned-out her stock. We tasted ‘Sopaipillas’ for the first time, a Chilean speciality of simply deep-fried dough that really hits the spot when hungry!

Back at camp, Juliette, Louis, Renaud and I were in decision-mode. We went through all our remaining food to decide if we had enough to survive on for the remainder of the trek to Argentina, and also evaluating if we were physically able (especially me)! We eventually decided on doing it – all in it together! We knew that we had to leave tomorrow to get a lead on the returning rain. We spent our last night in La Junta enjoying the fire in the communal area, chatting with Fernando about his studies to be an architect and life in Santiago, and having a debate on the legalization of Marijuana (we were all in agreement, so I don’t know if that qualifies as a debate!).

The next day we were ready by 9am but it took us an hour to say our goodbyes to Julie and Fernando who were heading back to civilization. For us, there was no turning back! Just as we were leaving, Fernando noticed this amazing partial Solar Eclipse behind the clouds – a good omen hopefully!

For more on our gruelling ‘Paso Leon’ trek to Argentina, check out the photos in the next post (in French).

The 1st day was all uphill, and more of the same mud, but even worse. We were progressing at 1km per hour, which is extreemly slow! The 2nd day was hard and slow and more uphill in the morning. We had to cross 3 strong rivers, barefoot and knee-deep in icy water, with our huge packs on. In the afternoon we reached Lago Chico and Lago Grande, where we would have lunch on a beautiful beach. It was more uphill/downhill (still no flat bits anywhere!), along the lakes, and then mainly downhill through a pine forest in the afternoon. At least here the trails were drier than the first days. We had a bit of a Blairwitch Project moment when we got lost in the forest as daylight started to fade, but eventually found our way and reached Lago Gormaz Vidal.

Here we could camp and rest as a storm blew past the following day. The wind was so strong we had to move our tents into a barn for shelter, and we spent the afternoon watching movies on my laptop. We set off again the following day (Day 4), when we spent all morning waiting for a boat that never came, to take us across the lake. Renaud and I decided to attempt the 13km on foot, and just after we left, the boat came! Fortunately, Juliette and Louis spotted us as they were passing by and told the driver to stop for us at another jetty on his next trip. By 3 pm we were all safely on the other side of the lake, and did the 3 remaining km to Torrotoso in record-time (it’s amazing how fast we could walk on a good trail with slightly lighter packs)!

On what we thought would be our last day, we speeded through the last 12km of the trek along emerald blue Rio Manso, to reach the Chilean border by lunchtime. We had to wait outside in the rain while the officers watched movies inside, waiting for authorization from ‘Interpol’ to stamp our passports! There were just a few more km left to reach Argentina, including a river crossing by raft. Here the border officers were much friendlier and efficiant! We had planned on hitching a ride from there, but the road was deserted and everything was closed! Plus it was raining very hard and we had no food left… We free-camped by the side of the road, enduring a wet, miserable, sleepless night! Needless to say we were out of there pretty early the next day, motivated by the prospect of a greasy meal and hot shower waiting for us in El Bolson! We powered through the 8 km till the main road in just over 2 hours, an impressive feat considering the slow progress of the previous days!

We reached a rafting adventure center where no tourist agencies would drive us for free, so we paid the equivalent of 12 euros each for a ride to Ruta 40 and bus stop, which were 40 km away. From there we were quickly picked up by a bus to El Bolson, and welcomed our brutal, but long-awaited, return to civilization!

The whole trek was a huge challenge, physically and mentally. I do not think I could have gone through it had I known how hard it would be. But once in it, knowing there’s no way out but forward, it’s amazing what the mind can have the body endure! We definitely have no regrets though, it was beautiful and amazing, and the story of how we crossed a border on foot is quite legend! Renaud has me on camera stating something to the effect that ‘if I survive this trek, I can do any hike or trek in the world!’.